Google Maps has caught up with Yahoo
and Microsoft in adding live traffic reporting for the United States to their
online mapping service.

spotted the change today (and Google now has the official word up here). To see the traffic yourself, just go to Google
Maps and click on the new "Traffic" button that you’ll see in the upper
right-hand corner of the map page, right before the "Map" and "Satellite" and
"Hybrid" buttons.

Pushing that button will make traffic light icons show up, like this:

Everywhere you see an icon, that’s where you can get real-time traffic
information.

Here is a screen capture of 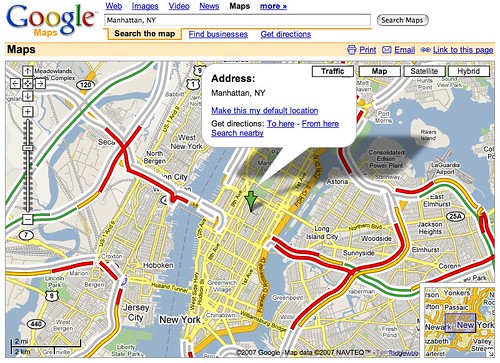 Google is playing serious catch-up in adding this information to its mapping
service. Yahoo

began offering live traffic data for the United States on
Yahoo Maps back on December 15, 2004, over
two years ago.

To see traffic at Yahoo Map, zoom out to the US "country" level, then click
on the "Live Traffic" button you’ll see at the top of the map. Places with
traffic conditions being reported will appear. Unfortunately, Yahoo doesn’t
appear to have more help information about getting real-time traffic that we can
point you at.

added live traffic on May 23, 2006. To see traffic at
Microsoft Live Search Maps, zoom out to see
the entire US, then click on the "Traffic" link above the map. Stoplight icons
will appear where information is available.

Ask Maps now remains the only major search
engine not to have life traffic data. But they do have walking directions, for
those who find the traffic is too much!