Google Under Fire For Showing Pre-Katrina New Orleans Images; Others Doing The Same?


Google goes back to pre-Katrina maps from USA Today reports that Google Maps
has changed their satellite imagery of New Orleans to show pre-Katrina images,
getting some local residents angry and wondering if there’s some type of
cover-up in the works. However, it’s unclear if these are pre-Katrina images or
not — and the situation’s just as confusing with mapping services from other
search engines.

Google’s popular map portal has replaced post-Hurricane Katrina satellite
imagery with pictures taken before the storm, leaving locals feeling like
they’re in a time loop and even fueling suspicions of a conspiracy.

Scroll across the city and the Mississippi Gulf Coast, and everything is
back to normal: Marinas are filled with boats, bridges are intact and parks
are filled with healthy, full-bodied trees.

Barry Schwartz and I thought we’d take a deeper look, to see what Google was doing
compared to the other search engines. Since the Lower 9th Ward is
mentioned, we looked at 1616 Caffin Ave, New Orleans, LA 70117, which is in that
area. From what we can tell, Google’s not alone in showing pre-Katrina images. 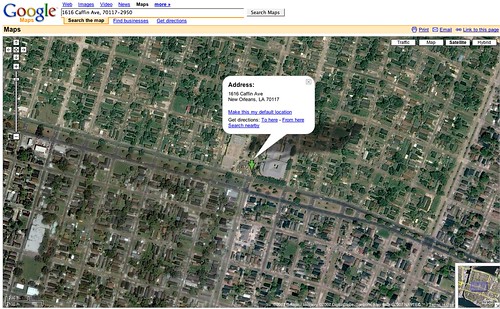 image from Google Maps (licensed from
DigitalGlobe) shows plenty of homes, while the USA Today article says of the
area:

Homes wiped off their foundations are miraculously back in place in the Lower
9th.

However, it’s not clear if no homes at all have been rebuilt since the
disaster. In addition, if you

zoom closer and pan left, you will notice that some of the roofs are dark
and there appears to be dirt between the homes. So it does appear that Google is
showing some post-Hurricane Katrina images. 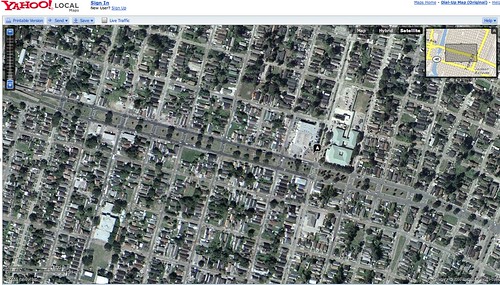 image from Yahoo Maps (licensed from
Aerials Express),
the area seems relatively OK, similar to what Google is showing. Unlike Google,

zoom closer and pan left, and the view doesn’t change to suggest damage. It
stays bright and green. 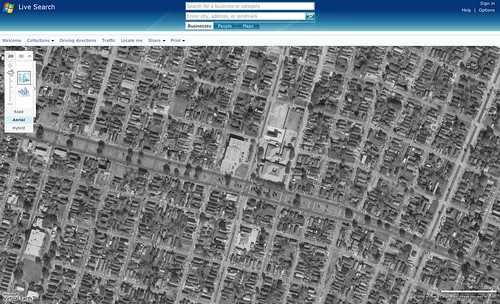 With Live Search Maps, the

image (from the US Geological Survey)
shows everything as gray, so it is hard to tell by the colors if there’s damage
reflected or not.

[Postscript: Gary Price points me to TerraServer, Microsoft’s other
mapping service that pulls from USGS images. 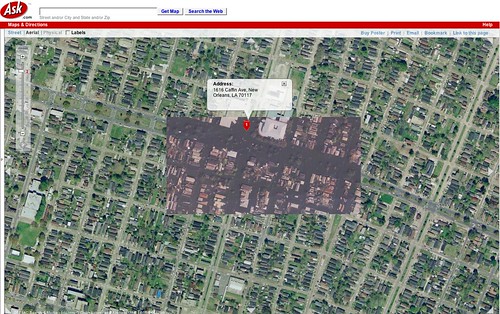 image (licensed from DigitalGlobe’s
GlobeXplorer) has a mix. Parts of the maps have post-Katrina images (and in
fact, appear to be right after the storm) while others seem to be pre-Hurricane
Katrina.

The USA Today article was sparked by

new images released by Google. But as you can see, the other search engines
may already have had older information covering the city as well. Or, it may be
that some of these images are actually fresh, showing parts of the city where
there’s been some rebuilding. It’s difficult for us to day, since we’re not
familiar with the rebuilding efforts in various locations of New Orleans.

Certainly, many people turned to these maps immediately after the Katrina
devastation to understand what happened. Google made
special efforts to get
updated images online, and it wasn’t alone. Many residents of New Orleans
clearly feel forgotten or abandoned after the damage. Perhaps the search engines
should consider keeping updated images of the area as a priority. That would
certainly make it easier for progress — or lack of it — to stay foremost in
everyone’s minds.

At the very least, this points out the need for images being show to be dated
somehow, so people know exactly when they were shot. This

isn’t the first time the issue has come up. Let’s get some dates out there,
so the guesswork can stop.

In order to publish the best data possible, we must take into account a
combination of factors including imagery date, resolution, and clarity. The
latest update from one of our information providers substantially improved the
imagery detail of the New Orleans area. The detailed imagery was taken before
Katrina.

We are working to update Google Earth with more current New Orleans
imagery, and continue to make post-Katrina imagery available on a
dedicated website.

Immediately after Hurricane Katrina made landfall, Google Earth coordinated
efforts with the United States coastal guard to get the most current data
possible into our databases. Imagery from different agencies was collected on
our servers in an effort to get representations of the devastated area that
were in the highest quality available and more easily accessible to the public
than ever before. As a result, teams of people formed across the country were
able to analyze affected topographies using Google Earth, which significantly
improved relief efforts.

To clarify further, I think the situation here is that Google may have gained
more detailed — IE, more close-up coverage — of the general area. It sounds
like they had to decide whether to use close-up information, while out-of-date,
or stick with newer information that didn’t let you zoom in as much.

Of course, zooming in does make little sense if you’re zooming in on areas
that are now completely different. I’ll check further on this, to confirm more.