President Jimmy Carter gave the welcoming remarks for Google Atlanta’s Open House Thursday. President Carter stated that his life has been transformed by Google, and that it would be hard to find many people in the developed world for whom that statement isn’t true. He gave a specific example of researching the Revolutionary War for one of the books he authored – his old habit of checking out 50 books at a time from the library has now been replaced by Google and he no longer knows the librarians’ names. President Carter noted that Google has brought together and benefited the whole world in a real – not theoretical — way. A longtime friend of Google founders Sergey Brin and Larry Page, Carter said he’s filled with admiration for the organization and is proud to call himself a Googler. 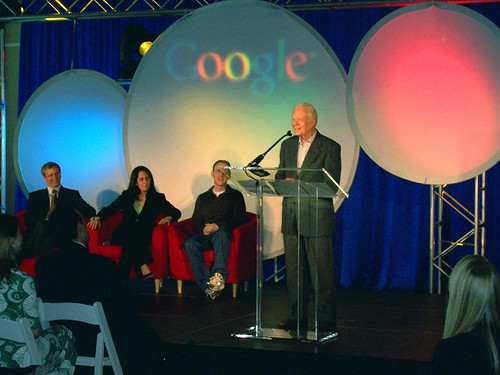 Google’s Atlanta staff of over 50 people recently moved into an office of 125,000 square feet in the heart of the Midtown business district. Most of the staff is in sales or engineering, with Atlanta chosen for strategic reasons. Atlanta’s the third largest city in the nation in terms of Fortune 500 companies, which is the primary focus of the sales staff (along with the retail and financial services verticals). In addition, the office overlooks the campus of the Georgia Institute of Technology, so its proximity gives it access to this talent pool of engineers.

The dozen engineers in the Atlanta office mostly focus on the Google Web Toolkit, which makes it easier for developers to program web applications, and the Google Image Labeler, a feature that allows anyone to collaboratively tag images. The office also employs several Googlers focused on traditional media, particularly audio ads, which allow advertisers to create and place radio ads online.

The requisite lava lamps, beanbag chairs and ping pong tables decorate the new Atlanta office. The “Peach Pit Café” provides free meals daily, and drinks and snacks are also available at any time. Among the open house attendees, perhaps the biggest buzz was generated by the Massage Room, where a massage therapist is brought in twice monthly to relieve the aches and pains of Googlers who get too enthusiastic with the foosball table or Nintendo Wii.

Update: Here are more pictures from the event. An entire set can be found here or you can a Flash photo gallery below:

Opinions expressed in this article are those of the guest author and not necessarily Search Engine Land. Staff authors are listed here.