The Google X Prize Gala: What You Missed

Out of this world gala at Google by SFGate.com reports on the X Prize Foundation fundraiser that Google host this past Saturday.

Who was there? Google cofounders Larry Page and Sergey Brin with respective girlfriends. The Getty family. Richard Branson of Virgin; Robin Williams; NFL legend Ronnie Lott; Tipper Gore; Arianna Huffington; California Attorney General Jerry Brown; Lars Ulrich of Metallica, singer Rufus Wainwright and many many more were there. The attendance was about 400 or so, raising more than $2 million.

Part of the $2 million raised included auctioning off items such as a US flag that was on the moon for $120,000, a flight offering eight minutes of weightlessness for another $120,000; a stay on Richard Branson’s private Caribbean island; a South African safari and a voyage into suborbital space on SpaceShipTwo for $300,000.

There is an outstanding photo gallery of the event from the Mercury News plus some Flickr images of the event are live. Here is one picture of the Google chefs going at it in the kitchen: 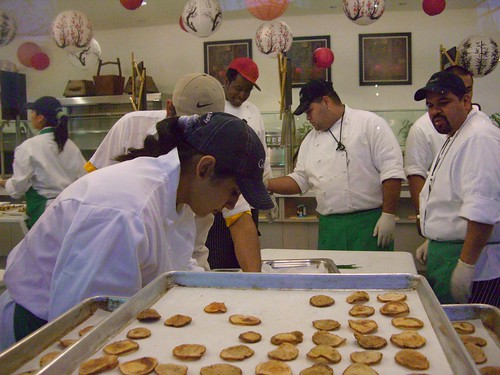 There are more articles on this at SFGate.com, Mercury News and O’Reilly.com, which especially gets into Robin Williams stealing the show literally, taking over from the auctioneer.